Travels around the world (with Beth and Chris)

By now, our friends and family have stopped asking us, “You’re going WHERE?” or “WHY are you going THERE?” But if they were still asking, our response this time would be,“we are going to Kenya to build a bridge”. The WHY answers come in many forms: “for as long as I’ve known Chris, his dream has been to help build bridges in Africa”, “Harmon and Teri Parker offered this amazing opportunity and we took it”, “it gives us a chance to really spend enough time in a culture with traditions, languages, beliefs, lifestyles very very different from our own and learn from it”, “so we can support an organization, Bridging the Gap Africa, who change lives in a walking world where a bridge can literally mean the difference between life and death”, “because we can – and if you can, you must!”, “if not now, when?”. You get the idea….

Our current abode is Tent 4, a spacious, bright, well-appointed enclosure, nestled along on the Ntiakitiak River in Mara Plains Camp in the Olare Motorogi Conservancy, adjacent to the Maasai Mara National Reserve. Suffice it to say we are in the African bush, but we are, by no means, roughing it (the project is a fund raiser, of sorts, for Bridging the Gap Africa – BtGA). 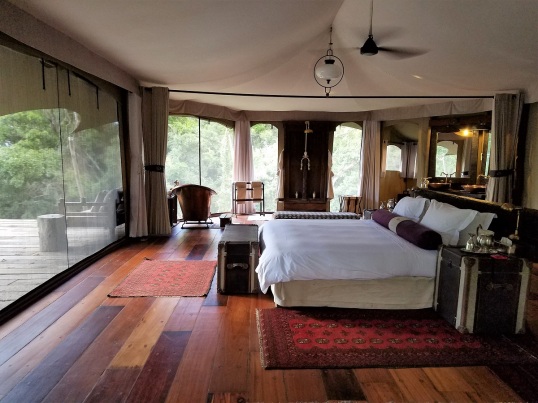 Through the drawn curtains and mesh screening I become cognizant of the sounds of morning. Chris has been up for hours, contemplating. I hear the distinctive sound of the screen zipper sliding quickly up its track as he lets himself in after his trek across the river to the dark kitchen with, of course, our morning coffee (it is sometime between 5:30 and 6 am). The bird noises go beyond chirping; there is a call that sounds like “co-coa-puff”, another resembling the igniting of a gas burner, another sounding like rusty squeaking bed springs, others are sweet repetitive singing, warbling, and responding. There may be a final huffing roar of a lion or barking whoop of a hyena before they settle for the day. The hippos are periodically guffawing like crusty old men laughing at each other’s off color jokes. 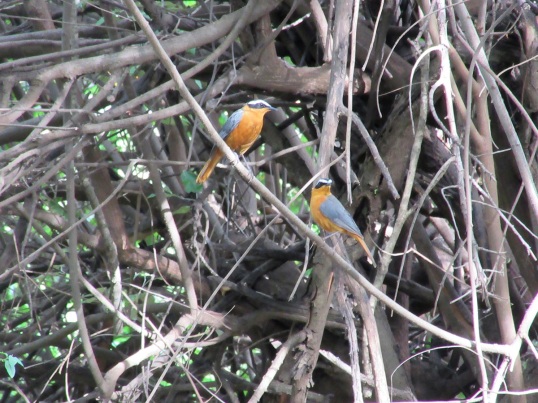 I am aware of the sounds surrounding me, particularly since we must be sensitive to the experience of the guests at Mara Plains; I try to “stretch my hearing” throughout the day. I want to sense what I can only hear in this present moment; the noises of the Kenyan Mara. The dramatically striped zebras with their yipping barks and snorts of air graze and watch. The skittering and sliding on the roof of our tent we realize are the vervet monkeys who peek over the edge of the canvas and give us a side-to-side head shimmy. The wind gently blowing through the leaves relieves us, a bit, from the heat of the day. The distant rolling and rumbling thunder bringing cleansing rain that might or might not cross directly over us. The raucous jackhammer croaking of frogs in the river who are heard, but not seen, begins at dusk. The hippos bellow 24/7! The Kenyan BtGA men confer in low Swahili murmurs. The Land Rover engines turning over at dawn to begin the morning game drives indicates that we have some time to do our clamorous work for a few hours. The droning chugging of the generator, high-pitched sound of hack sawing through re-bar, and the clinking of hammers on nails signify progress on the building of the bridge. 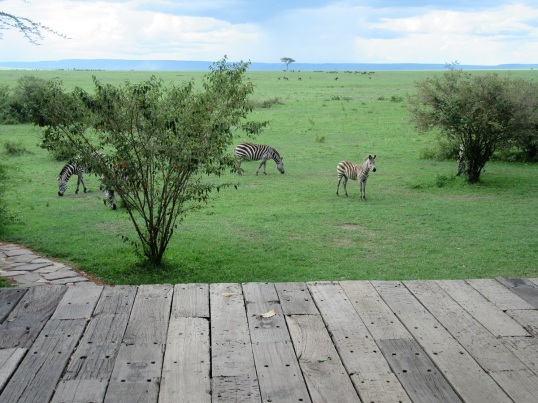